You might not have given much thought to medieval floors, but they were quite varied and these days they offer good opportunities to a novelist for scene-setting or showing a character’s state of mind.

In Beloved Besieged Elaine covers the floor of her father’s hall with rushes strewn with sweet-smelling herbs and flowers for her betrothal celebration. In my current work in progress, the heroine drops to the floor of the main room of the inn in which she’s staying, even though she suspects it will result in an unpleasant stain on her clothes.

Not all medieval floors were equal. In most houses, the floors of the rooms on the ground floor were simply beaten earth. This always sounded unpleasant, especially when I saw the state of the floors in castles that I visited. Thanks to them I had visions of lumpy, uneven floors being swept away when they were brushed, or of bits of a floor sticking to shoes if someone entered the house from the rain, or of it being scratched up by dogs or cats. Then I saw one in the Medieval Merchant’s House in Southampton. That floor is very solid and secure and would last for a long time with only a little maintenance. 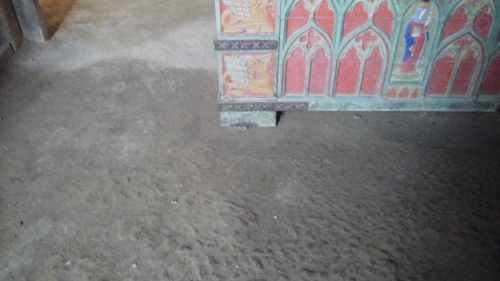 It took a fair amount of effort to make such a floor and sometimes the neighbours were called on for help. As many people as the householder could get would walk on the floor for an afternoon (or longer) until it was flat and smooth. They literally walked round in circles until it was done. They would have a chat or a sing as they walked. This seems to me to be a very satisfactory way of providing a floor surface and is probably quicker and more enjoyable than laying a laminate floor.

The earthen floor would be covered with rushes. Rushes provided good insulation and could help to keep the floor clean. I know that I often point to The Secrets of the Castle for examples, but the archaeologists demonstrate the practicalities of medieval life so well. When she moved into a labourer’s hovel near the building site, Ruth Goodman pondered how the rushes might have been laid, since loose rushes would not stay where they were put for long. She concluded that they would probably have been tied together in bunches and then laid on the floor. Other historians and archaeologists have considered whether the rushes might have been woven into mats before being placed on the floor, but everyone seems to be agreed that loose rushes were not strewn on the floor. Rushes weren’t just used in houses. Almost every domestic beaten earth floor would have been covered in them.

In a public building, an inn, for example, the rushes would have contained dreadful things trodden in from outside by people and dogs, but in a hovel, where the rushes would have doubled up as the bedding for the occupants, they would have been kept much cleaner. In the spring and summer herbs and flowers could be added to make the rushes (and the room) smell sweeter and to disguise less welcome odours.

Tiles provided a far more upmarket floor surface. Like everything else in medieval times, their production was very labour intensive. They required someone to dig the clay, which had to be cleaned and homogenised until it could be worked. Then it would be pressed into square, wooden moulds. After the tiles had been pushed out of the moulds, they would be dried and stacked in a kiln to be fired. A medieval kiln was more like an earthwork than an oven and firing could take twenty-four hours or more. Disaster was always close at hand. Bad weather could mean that the firing was delayed, or the tiles could be too wet and would explode when the water became hot enough to turn into steam.

Tiles could be plain or patterned with different coloured clay. Decorated tiles were for the very rich or churches. The photographs in this post are of encaustic tiles recovered from the site of Hyde Abbey in Winchester. The patterns are made by using different colours of clay. Like the ones in the photographs, they were usually of two colours, but they could contain up to six different colours. Because the pattern is not just on the surface, it remains as the tile is worn down.

38 responses to “The Medieval Floor”