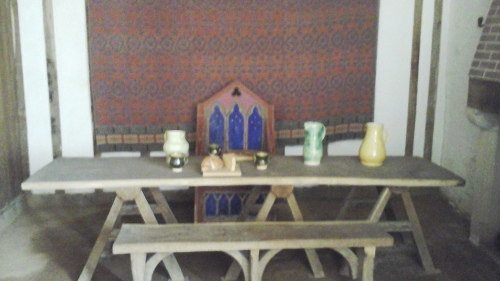 The hall of the Medieval Merchant’s House, Southampton

Last week I gave an overview of the Medieval Merchant’s House in Southampton. This week we’ll spend some time in the most important space in the house – the hall.

Even though the house was owned by a wealthy merchant,  the hall is quite small.  The table takes up almost the entire width of the room. As indicated by the objects on the table, this was where the merchant, his family and their visitors would have eaten. They would have sat on one side of the table only and another table would have been put along the wall at right angles to the high table to accommodate any else who was eating with them.

The house has been furnished in fourteenth-century style based on furniture that has survived from that period as well as illustrations from the fourteenth century.  The pottery jugs and pots are copies of vessels found during excavations in a nearby street.

The hall would have displayed the merchant’s wealth, which you can see represented above by the ‘tapestry’ and below by the jugs and pots standing on the cupboard and the chest at the foot of the stairs leading up to the first floor.

Ceramic displays in the hall of the Medieval Merchant’s House, Southampton

The window you can see above, like the rest of the windows in the house, did not originally contain glass. They were closed with shutters.

The man who lived in such a house would have been wealthy enough to have silver vessels. silk, lengths of fine cloth, carpets, feather-beds, chests and expensive, fashionable clothes. All of these were mentioned in a merchant’s will in the middle of the fourteenth century. As much as possible of the merchant’s wealth would have been displayed in the hall.

Another chest stands against the wooden partition separating the hall from the passage. 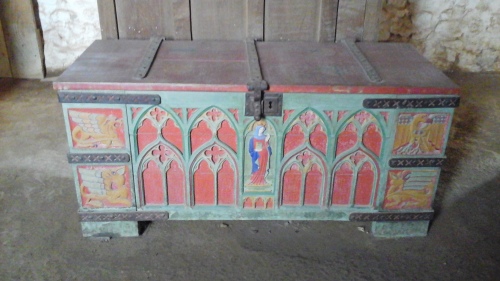 Chest in the hall of the Medieval Merchant’s House, Southampton

Wall and ceiling of the hall, the Medieval Merchant’s House, Southampton.

I have included the picture below, despite its quality,  to show how small the hall is. I took it from the bottom of the stairs, with my back against the far wall. 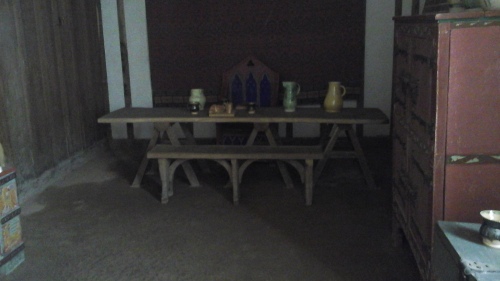