A Visit to City Museum, Winchester

The last time I was in Winchester, someone recommended the City Museum to me. There wasn’t quite enough time to go in on that day, so I was pleased when the necessity of going to Winchester arose this week and I had the opportunity to see what delights it holds.

It’s a small museum, but I found a great deal there to enjoy. This post is really a random collection of things there that caught my eye, and I hope they’ll appeal to you as much as they appeal to me. I’m sorry about the quality of some of the photographs. It was a sunny day and all the things that interested me are under glass.

Winchester was an important town under the Romans, and the whole of the top floor of the museum is dedicated to some amazing finds both from the town and nearby villas. There are coins there that are 2,000 years old and a mosaic that’s about five foot square and complete, save where a tree root grew into part of it. What I loved, though, were these fragments of a wall from a house where there’s now a shopping centre.

I was attracted to them by the bright colours. It’s easy for us to believe that people in the past lived in a monochrome world. The artefacts we have from those times have mostly lost their paint, but these bits of wall are a reminder that the Romans, just like the people of the Middle Ages,  lived with and liked vibrant colours.

The museum was recommended to me on the strength of its medieval exhibits, but in Winchester medieval means Anglo-Saxon. It was Alfred the Great’s capital and there are many interesting things in the museum from his time.

My favourite Saxon object is this tiny piece of a house-shaped shrine. It’s a gable of the roof, so not desperately important, but it’s exquisite. To give you an idea of the craftsman’s skill, it’s about 2 1/2 inches tall. 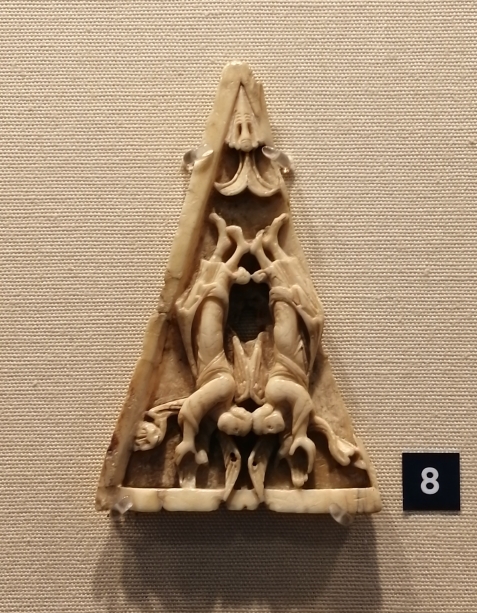 It’s from the end of the tenth century and is made of walrus ivory. At the top, there’s an acanthus spray, which is, according to its card, typical of the Winchester style.

Another religious object is this shell. If you look closely, you can see the holes drilled into it so that it could be sewn onto a pilgrim’s hat. It would have been worn to show that the person wearing it had been to Santiago de Compostela, the third most important destination for medieval pilgrims. 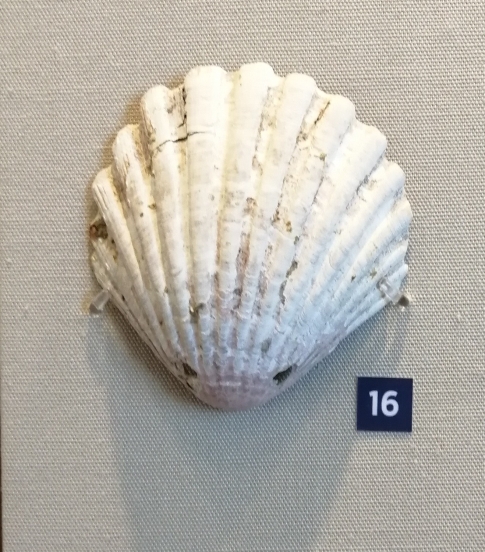 There were also tiles. I love tiles, but I’ll spare you all the pictures I took of them and show you just two that I thought were particularly interesting. 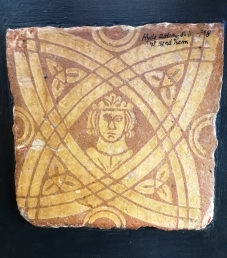 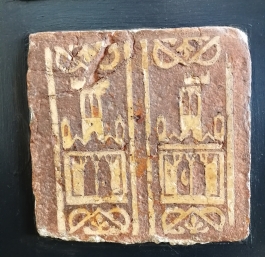 I’ve written about how tiles were made here. 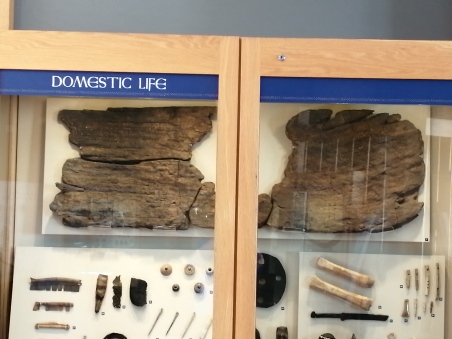 I’ve saved the best till last. This is a fourteenth-century toilet seat. It’s not quite as big as it seems. Those are combs on the left and the fipple flutes on the right are tiny. The toilet seat came from a house belonging to John de Tytynge. Fortunately, other items were found on the site. I’m not sure I’d want my name to be remembered only because the excavation of my latrine pit gave up a toilet seat.

17 responses to “A Visit to City Museum, Winchester”