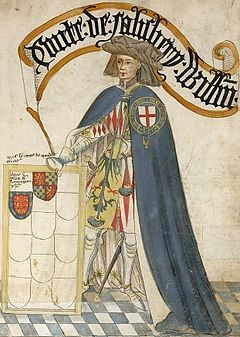 Joan of Kent’s story is more fantastic than anything I would dare to make up in a novel. She was the daughter of a traitor who married the Prince of Wales; she knew poverty and great wealth; she had three husbands, two at the same time; and she married two of them clandestinely.

Her life was so full of incident that I’ve had to divide the post into parts. Like her last husband, the Black Prince, Joan was given her nickname after her death. In the light of her story, it’s very possibly ironic, since, as we shall see, she wasn’t a maid for very long. Although little is written or known about Joan herself, her life can be inferred from what the men closest to her wrote or are recorded as doing.

Joan was born in 1328.  Her father, Edmund of Kent, made the mistake of supporting his half-brother Edward II, then supporting Isabella and Mortimer in the rebellion against Edward, then supporting Edward again. Edward II had been deposed by his wife and her lover in 1326, imprisoned and declared dead in 1327. Tricked into believing him to be alive, Edmund tried to rescue his brother from his imprisonment in 1330. In March of that year he was executed as a traitor by Isabella and Mortimer and Joan, her mother and her brothers were made prisoners and all their property taken from them.

Seven months after her father’s death, Joan was taken into the royal household. She was cousin to Edward III, who finally took control of his kingdom in October 1330. Since the king’s first child, Prince Edward, had been born that summer, Joan and her brothers moved into the royal nursery. When the Prince’s sisters were born, Joan’s younger brother stayed with the prince (her older brother having died) while she went with the princesses into the queen’s household.

In 1338 she travelled with the king and queen to Flanders where Edward III tried to gain support for his war with France. In the spring of 1340, at the age of 12, Joan entered into the first of her clandestine marriages. She married Thomas Holland, who was probably twice her age. One of the king’s household knights, he was a good soldier who had served in Scotland and in France. He was not what any of Joan’s relatives had in mind for her and she was a great prize for an ambitious young man, even before she inherited her brother’s wealth. Holland was the second son of a father who had been murdered for changing sides in the earlier civil war. Shortly after they married, Holland took part in the battle of Sluys, fought in Edward III’s disastrous campaign in France and then went off to fight in a crusade against the Tartars, leaving his wife behind, all without anyone knowing that they were married.

Bearing in mind that Joan lived with the young princesses, it is difficult to imagine how Holland managed to court Joan and then get her away from her companions long enough to marry her and bed her, but he did, and their marriage, as we shall see later, was binding.

Later in 1340 Joan returned to England and in early 1341 she was forced into a marriage against her will with William Montague, oldest son of the Earl of Salisbury. In many ways this marriage shows Joan’s importance to Edward III. The Earl of Salisbury had been his closest and most trusted friend during the early years of Edward’s reign and he had led those who arrested Isabella and Mortimer at Nottingham castle in October 1330, enabling Edward III to begin to rule in his own right.  The marriage was advantageous to both Joan and Montague. Montague would be a very wealthy man when his father died and marriage into the royal family confirmed his father’s status.

Joan told her mother about her marriage to Holland, but was either not believed or the marriage was not considered valid. It is not known who knew about Joan’s first marriage, but it’s probable that the groom and his father had been told. It’s also possible that the king and queen were aware of their failure to look after her while she was in their care.

There has been speculation about why Joan didn’t just accept the marriage with Montague, since it was a good match for both of them and her first marriage could have been set aside or forgotten about. She must have loved Holland, but I also wonder, based on nothing but her continued disinclination to be his wife over several years, if she didn’t learn something about Montague that made her dislike him intensely. It’s pure speculation, but so is almost everything written about her.

In late 1341 or the beginning of 1342 Holland returned and claimed his wife, but failed to remove her from her new husband. Holland had left her alone for so long that it is believed by many that he didn’t care for her and, on discovering that she was married to Montague, decided that he was willing to be bought off by the Earl of Salisbury. Holland was not bought off and nor did he relinquish his claim on Joan. He was sent back to fight in Brittany with nothing resolved. He later returned to England, but left almost immediately to crusade against the Moors in Spain. If Holland wanted Joan back, he would have to prove that his marriage to her was valid. That would take money, of which he had very little.

Holland returned to England and, since the Earl of Salisbury was also in England, it is believed that serious negotiations took place between them. These were cut short when the Earl of Salisbury was injured in a tournament and died of his wounds. Matters were still not resolved when Holland went to France again. He returned, only to go back to France in 1346 with Edward III. All three of Joan’s husbands were together on this campaign. It was the first campaign of the 16 year old Prince Edward and the 18 year old William Montague.  Holland was now a very experienced soldier in his early thirties.

Holland was promoted to joint commander of the Prince’s division and fought at Crécy beside him. He then went on to take part in the siege of Calais and was one of the king’s negotiators there. During the campaign he captured a French noble whose ransom was literally a fortune (although Holland only received part of it before his captive returned to France on parole and was executed) and when he returned to England in October 1347, Holland could afford to start proceedings in the papal court to establish that he was married to Joan. Partly due to Montague’s delaying tactics, it was two years before the judgment was announced.  The esteem in which Holland was held by the king at this point, is shown by his being honoured as one of the first Knights of the Order of the Garter along with the Prince and Montague.

It is possible, but not probable, that Joan had not seen Holland since he left Flanders in 1340. It is more likely that she saw him at tournaments and in the court as his favour with the king grew.  It may be for this reason that a close guard was put on Joan by Montague, when he forcibly removed Joan from where she had been living and took her into his own house.

On 13th November 1349 the pope confirmed that Joan was married to Holland.

Joan’s story so far raises all kinds of questions. Was she abducted, raped and forced into marriage by Holland? Was she later abducted and raped by Montague? Why did she persist in her marriage to Holland, when Montague was the wealthier man with higher status? Possibly the simple answer is that she fell in love with a dashing older man and, having given her word when she married him, refused to break it.