When is a clandestine wedding not a secret wedding? 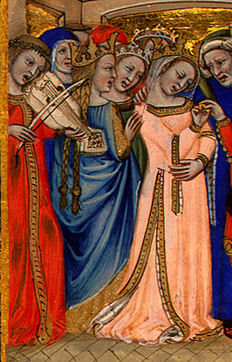 As demonstrated by the life of Joan of Kent, clandestine marriages were not always invalid marriages, nor were they solely the province of the lower classes. Joan had two clandestine marriages: one to Thomas Holland and the other to Edward of Woodstock, the Prince of Wales. Joan’s difficulty with establishing the validity of the first shows in part why the church frowned on them and tried to stamp them out.

The church had been trying for centuries to control marriages, but all that was needed for a valid marriage was for the two people concerned to say to one another that they were married. There were other conditions, of course. They could not be too closely related, as in the case of Joan and the Prince, and they could not already be married to someone else. They did not need to be married inside a church or by a priest, nor did the marriage need to be recorded officially.

Clandestine marriages were not necessarily secret, although that was so in Joan’s case. The marriage vows themselves were often made publicly. Clandestine simply meant that there was no public betrothal and no solemnisation. The public betrothal allowed anyone who had an objection to the marriage to make it before the wedding itself took place. The church wanted couples to be married with a priest in attendance. The idea was not that the priest married them, for the couple did that themselves when they made their vows to one another. They were not even married inside the church. If the couple were having a ‘church wedding’ it took place in the church porch, with the couple only going inside if a nuptial mass was to be celebrated. If they were not getting married in front of a priest, they could be married anywhere they chose.

Clandestine marriages had the disadvantage that, most often, only the couple themselves knew that it had taken place and either of them could say that there had been no marriage (or claim that they were married to someone when they were not). It happened frequently that a woman would have sexual intercourse with a man she believed to be her husband, only to have him repudiate the marriage later, usually if she became pregnant. This was the course that Joan of Kent’s relatives urged her to take when she told them that she was married to Thomas Holland. She had been young, only twelve at the time, and impressed by an older man (he was probably about twenty-four), but Joan insisted that, not only had the marriage taken place, but that it had also been consummated. It was also not unknown for a woman whose marriage prospects were slim to claim that she was married to a man who had made no such promises.

12 responses to “When is a clandestine wedding not a secret wedding?”