Following comments from two or three people on recent posts, I made pottage this week as an experiment.  I wrote about pottage here. It was the basic meal in the fourteenth century and everyone ate it, rich or poor. More or less anything could be thrown into the pot to make it, but it’s summer at the moment and I decided to use peas from the garden as the main vegetable.

The idea was to make pottage and taste it to see how bland or otherwise it was for people who could not afford spices or meat. I only used things that can be grown locally and would have been available in the fourteenth century – at certain times of the year, at least.

I have failed to grow onions and garlic, but a friend only a few streets away, has great success with them, so I used shop-bought ones with a (fairly) clear conscience. I have grown celery in the past, but I don’t have any in the garden at the moment, so the supermarket helped out there as well. I used these ingredients for the basic stock. A fourteenth-century cook might have added some bones to the stock if she had them, but I’m a vegetarian, so I didn’t. 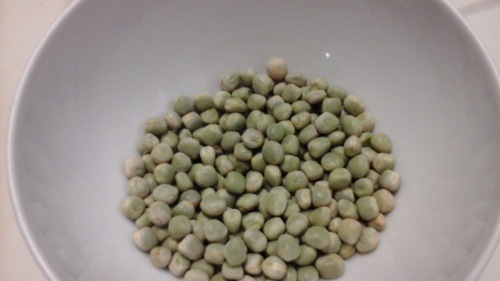 The peas in my garden aren’t quite ready, so I bought marrowfat peas and used them for my first pottage. These are peas which have been left to dry out in their pods in the fields, so I think they would be very like the dried peas that would have been used in the fourteenth century. I soaked them overnight. The instructions on the packet said to add bicarbonate of soda, but this would not have been an option for the fourteenth-century housewife, so I left it out.

Marrowfat peas are used to make ‘mushy peas’, so I know that they would make a fairly thick pottage without needing any other thickening agent.

The herbs were from my garden. I used sage, marjoram and chives – rather a lot of them. 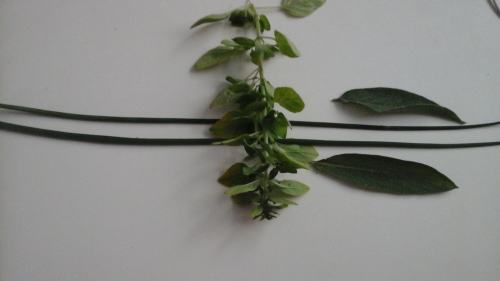 I boiled an onion, two sticks of celery and some garlic in some water while I prepared the herbs. I drained the peas and added them to the saucepan, making sure that the water covered them.  They simmered for almost an hour before I added the herbs. By then the peas were soft and breaking up. I had expected them to break up more. When the peas had been on for about an hour and a quarter I poured the pottage into a bowl and ate it.

It might look unappetising in the picture at the top of the post, but it was very tasty and I did not miss the pepper and salt I usually add to my food. There was an odd aftertaste, though, which was probably due to being rather heavy-handed with the herbs. I don’t think it was due to omitting the bicarbonate of soda. A bit of internet research told me that it makes no difference to the taste. It was satisfyingly filling, but I did have a large helping.

I plan to have two more goes at pottage when fresh peas are available next week.