The Great Hall of Winchester Castle 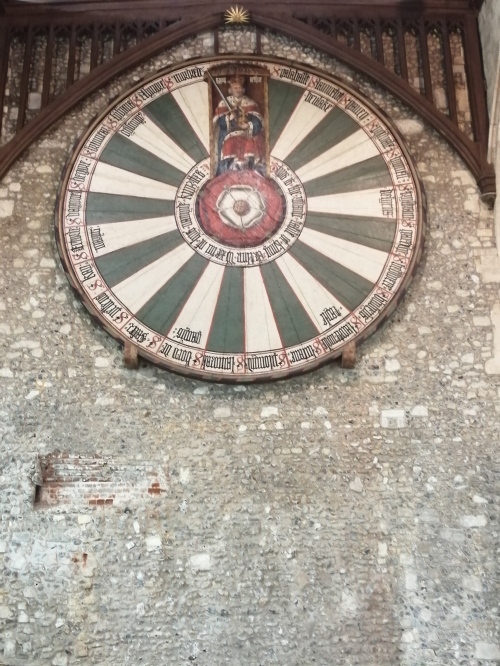 The Round Table, Great Hall, Winchester

During a recent trip to Winchester I visited what remains of its medieval castle. The castle was built at the highest point of the town, which was also the furthest point from the river. The only remnants of the castle these days are some stumps of walls, some vaults which are closed to the public, and the Great Hall.

You’ve probably come across the Great Hall in photographs, even if you didn’t know what it was. It’s best-known today for housing the Round Table and that’s what tourists pay to see. There’s a bit more to the Great Hall than that, but it’s what we’ll start with.

Edward I had the Round Table built, probably around 1290 for a banquet. He didn’t have it painted with the portrait of King Arthur and the names of the knights, though. The Tudor Rose in the middle of the table is a clue to the identity of the king who did have it painted: Henry VIII. King Arthur’s face was originally that of the young Henry, which must have been a bit confusing for him, since his older brother, who would have been king had he lived, was called Arthur. Over the years, various renovations have changed the features of King Arthur into those of an old man. It was only because X-rays were used during one of the more recent renovations that we have any idea of what King Arthur originally looked like. The Victorians, as is usually the case, were probably the guilty parties here.

The table is massive. It’s 18 feet in diameter and weighs 1 ton 4cwt. It was made of 121 separate pieces of oak and had 12 legs. When it was renovated in the 1970s, the wood was dated by means of dendrochronology and the youngest tree-ring they found was dated to 1219, suggesting that the trees used were felled no later than the second decade of the fourteenth century.

There’s a model of its original construction on display just outside the hall.

Model of the Round Table, Great Hall, Winchester

Model of the Round Table, Great Hall, Winchester

The castle itself was originally built by William the Conqueror at the end of the eleventh century.  Henry III was born there in 1207 and it was he who had the Great Hall built. A fire during the reign of his son, Edward I damaged the royal apartments so badly that they were never repaired and the royal family thereafter stayed in the palace of the Bishop of Winchester whenever they visited.

The Great Hall was used as a courtroom from the reign of Henry III off and on until 1973. Famous trials that took place there included those of the Earl of Kent (a son of Edward I) in 1330 and Sir Walter Raleigh in 1603.

The Great Hall has other delights, not least a herber garden set out in a style that would have been familiar to Edward I’s queen, Eleanor, who brought a number of plants to England from her native Castile.

The Victorians tried hard with their renovation. This wall, where the Round Table was hung after it was no longer needed for its original purpose, is covered with the names of the parliamentary representatives for Hampshire from 1283 to 1868. For many years, possibly centuries, there was a medieval mappa mundi on this wall.

They also made an effort with the windows. Apparently the long walls of the hall were originally painted with heraldic devices. The Victorians put devices of kings, queens, bishops and others important to the history of Hampshire in the windows. Here’s the window with the devices of Edward III, his son Edward of Woodstock, and his great friend William Montacute.

The Great Hall is well worth a visit if you’re ever in Winchester.

Stone buildings and stonemasons went together in the Middle Ages. It took skill and ingenuity to produce beautiful buildings, many of which have stood for centuries. It also took planning and the use of sophisticated lifting equipment.

Stone was an expensive material to use, even if it was quarried locally, and it needed skilled men to cut and shape it.

Different groups of men worked with the stone needed for a castle, a cathedral or a church. The stone had to be quarried first. Quarrymen were not masons. Their job was simply to get the stone for the masons to work on out of the ground. Usually, local stone was used, but occasionally stone could travel long distances, even from other countries. For Winchester Castle, for example, stone was brought from Selborne (18 miles away), the Isle of Wight (30 miles, but half of them on water), Haslebury (70 miles) and Caen (across the Channel in France). Transport costs, as well as the quality of the stone, meant that stone brought from far away was very expensive.

There were different classes of masons and the first two were the rough masons and the freemasons. The rough masons were unskilled and made the rubble walls, which were often used where neither strength nor appearance was considered important. Rubble was a low grade of stone, which could not be cut or shaped. Sometimes rubble walls were dressed so that an inner core of rubble was covered with smoothly-cut and close-fitting stones. This photograph shows a rubble interior. 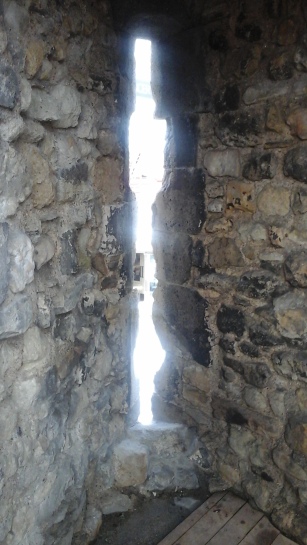 Freemasons could cut freestone to make squared blocks (ashlars) or complex shapes. The interior and exterior walls of Romsey Abbey pictured at the top of the post and below are made of cut stone. The freemasons put the stones in place and carved the decorative parts of a building. Freemasons earned more than rough masons, but they were not at the top of the chain. 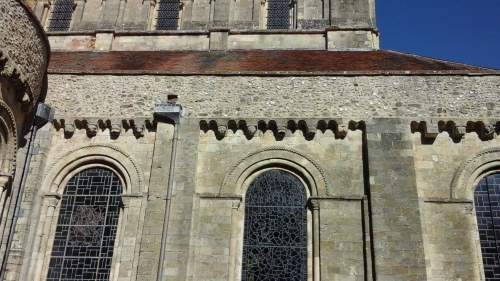 Some patrons wanted more of a say in the design than others and some master masons seem to have reused design elements from one building to another. They might even have been employed specifically to incorporate something that they had done elsewhere and that the patron liked.

Designs for decorative work were illustrated on a tracing floor. This was a plaster-covered surface on the ground onto which the master mason could trace the full-size design. From this he made a wooden template for the freemason to use as a pattern.

The masons worked in a lodge – a wooden structure on the building site that provided some shelter while they worked on the stone. It was also a place for them to eat and rest.

The cut stones were heavy. At ground level they could be moved on wooden rollers, but getting them to the tops of ever-growing walls required more ingenuity. A pulley was used to lift stones. Usually, this was done with the help of one or more men inside a treadmill. A hand winch could be used for small blocks of stone.

Most buildings were designed using squares and circles. The master mason used simple geometry to work out the proportions with a compass and a square. He did not necessarily need to understand the mathematics behind his design.

The working season was usually from the feast of the Purification of the Virgin, or Candlemas (2nd February), to All Saints Day (1st November). At the end of the season the work was covered, often with straw, to protect it from the elements until the next season. Work stopped before temperatures fell below freezing, as the mortar was useless once it had frozen.

Medieval building techniques can be seen at the archaeological project at Guédelon, where a castle is being built using techniques from the thirteenth century. The DVD Secrets of the Castle, which was filmed there, shows these techniques.