10 tips to get the best out of your visit to a medieval site. 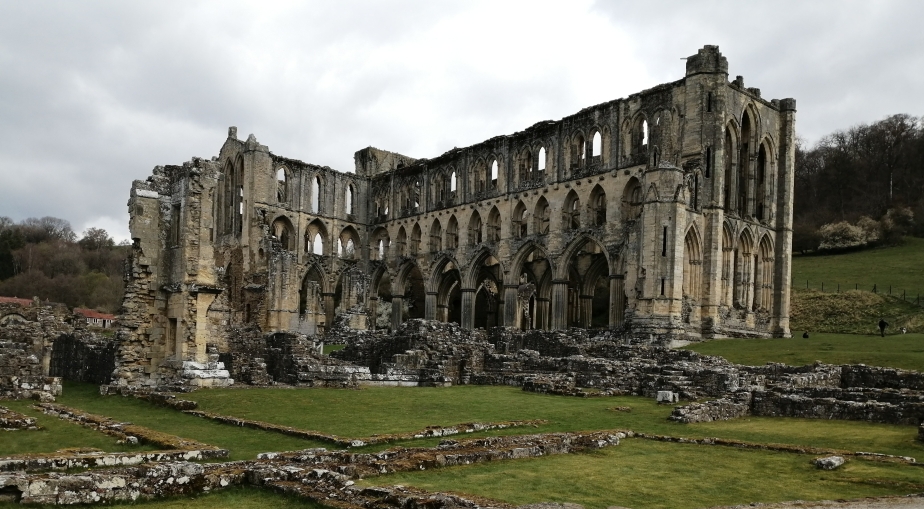 I visit loads of medieval sites. Not only do I find them interesting in themselves, but they can also help me to set the scene when I’m writing my novels. I visited a small manor house in Dorset a couple of months ago and it’s become the house in which the heroine of my current work in progress learned how to manage a household. In another novel, a fortified manor house in the Midlands became the property my hero has to defend against a band of ruthless outlaws.

Over the years I’ve learned a few things about visiting medieval sites and I thought I would share some of them with you.

Most medieval buildings are ruins and the ground, stones and steps are uneven. Although climbing on walls is forbidden, you will probably have to walk over bits of wall in your tour of the site. You don’t want to turn your ankle in the middle of nowhere while you’re wandering around an abbey alone. Wear something that will provide a bit of support if you can. The paths are usually gravel and you will undoubtedly encounter grass, which might be wet.

Castles tend to be on hills and abbeys are often in valleys. Since the sides of buildings will be missing and rooves are rare, you will be exposed to the elements during your visit. The weather in England can be changeable. It has rained almost every day this June and it’s mostly cold, but it’s very warm when the sun does make an appearance, so you need to have sunglasses and sunblock ready as well. I took the photograph below in mid-April wearing a thick woolly jumper, gloves and coat. If I’d had a hat with me. I’d have worn it as well. Three days earlier I was strolling around in bright sunshine without a coat.

Guide books are always useful. They usually have a map of the site and this will often use different colours to show when parts of the castle, abbey or house were built.  There is always something you didn’t know or couldn’t work out for yourself in the guide book, including the history of the site. They’re also helpful when it comes to labelling your photographs later.

4. Be prepared to walk and climb

Some medieval sites are quite large and you will walk quite a distance during your tour. If there’s a keep involved, you could be climbing several flights of stairs, some of them very narrow and uneven.  Supplies for Old Sherborne Castle used to be brought up these steps every day from boats, but I found them hard work. 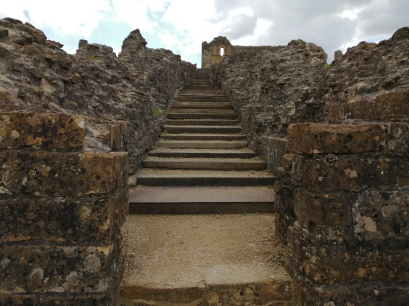 At many castles you can walk around the outer perimeter and that might be a lengthy walk.

Those in charge did most things on the first floor, which, in many buildings, hasn’t survived. You will still get some idea of how they lived if you remember to look up occasionally.

This view is labelled the Great Hall at Kenilworth Castle, but you’ll notice that the fireplace and the windows are halfway up the wall. What appear to be arches on the ground, are the remnants of vaults. The great hall was on top of them. Visitors and guests had to go upstairs to visit the largest space in the castle.

Glances upwards will almost always be rewarded. This is the Tudor ceiling at Muchelney Church. It’s from a much later period than I’m usually interested in, but it’s beautiful. Sometimes there’s a clue that you should look up. You might just be able to see the mirror halfway down the church, placed there to enable people to view the ceiling without hurting their necks or risk of falling over.

6. Label your photographs the day you take them

I’m very bad at this and have too many photographs that make me pause and wonder why I thought their subject was interesting. Having the guidebook to hand when you do this will help. Something else I find useful is photographing the boards that are usually to be found scattered around the site telling you what you’re looking at. 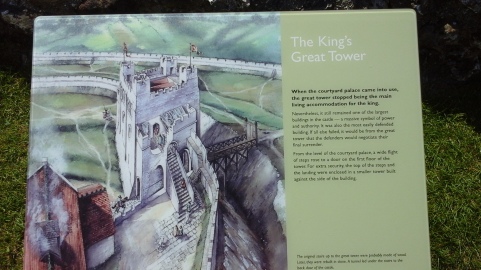 Talk to the staff who look after the site. No one knows as much about the site as they do or is as interested in it as they are, unless it’s their first week at the site, in which case they will probably avoid making eye contact. Unless they’re really busy, they’re happy to answer any questions you might have. Because I ask questions, I’ve been shown things of interest I might have missed, or been told stories that aren’t in the guide book. At one castle the site manager told me his theories about how many times a particular fireplace had been moved and at an abbey the manager told me what he knew about the Saxon history of his site.

Earlier this year, I visited an abbey founded in the twelfth century to discover that most of the pre-fifteenth-century bits had been destroyed. It was interesting, but not as interesting for me as it would have been had there still been earlier remains. If you’re interested in a particular period, make sure that the site concerned has something to offer you. Many will have been ‘improved’ over the centuries. Most places have websites, but you’ll need to read them with care.

9. Look at the outsides of buildings as well as the insides.

I try to walk around as much of the outside of a building as I can. Sometimes this is unsafe, especially where there’s a river or a moat.

There was no hint of this rather wonderful chimney on the inside of the building.

10. Finish the trip with a visit to a good pub

This hardly needs to be said.

I hope these tips are useful and you can find time this summer to visit a medieval site.