Last week we looked at the processes wool underwent before it got to the weaver. Now we’ve arrived at the loom.

Of the processes described in the previous post,  there were two that were quite similar: combing and carding. They each produced a different type of thread, however. The shorter fibres that had been carded were called woollens and the longer ones that had been combed were called worsteds. Woollens were often used for the weft threads on a loom and the worsteds for the warp.  The warp was made by attaching the spun thread to the loom at right angles to the weaver i.e. running away from him. The weft was the moving thread attached to the shuttle.

I’m not sure whether this next process – sizing – was carried out before or after the loom was warped. The warp threads were smoothed by coating them with something so that they would provide less resistance to the weft thread. There was always a danger that the warp threads, which were held under tension on the loom, would snap, and the passing of the shuttle between them would cause abrasions. I’ve seen a recipe on the internet for sizing using gelatine. I don’t know how medieval it is, but it would certainly flatten any fluffy fibres in the thread. It would also be easy to wash it out later.

From the pictures I’ve seen of medieval looms, weaving could either be fairly straightforward or extremely complicated. Simple looms for wide pieces of plain cloth were structured like an open cube, while others were a series of cubes joined together, going up rather out, needing two people to operate them. These latter produced complicated patterns on the fabric.

You would think that once it was woven the fabric would be ready to be made into garments, but, no, there were still more things to be done to it. It could be calendered, which meant a hot press was used on it. Until the late Middle Ages a slickstone or a piece of rounded, heated glass were rubbed over it. You can see one here on my Pinterest board. The purpose of this was to give a shine to the fabric, or to make it thinner.

The woven cloth was usually fulled. This encouraged it to felt, which produced a firmer fabric. It was soaked in an alkaline solution, most often fuller’s earth (a type of clay) and water, but stale, human urine could also be used. The purpose of this was to remove any grease or dirt still in the fabric. The fabric was rinsed, then beaten with hands or feet. An early use of water power was to hammer fabrics as part of the fulling process. Large wooden hammers, which wouldn’t damage the fabric, were used.

Here’s a short video of a fulling mill in action.

Here’s Tony Robinson going a bit over the top as a medieval fuller.

Fulling caused cloth to shrink by a third, so the cloth was stretched as it dried. The frame on which it was stretched was called a tenterframe. The fabric was stretched on small, closely-spaced hooks – tenterhooks.

There was one final process for some fabrics. Teasling made the fabric even softer. The cloth was hung over a beam and dried teasel heads set in a wooden frame were drawn over the surface to raise a nap. You can see this illustrated in my Pinterest board. The nap was shorn and, on good quality fabrics, the teasling would start again, up to four times. This must have been a scary part of the process. The shears were long and one slip could ruin the cloth that it had taken so long to make.

Here’s a clip from a recent episode of Les Feux de Guédelon which illustrates another use of teasels. I’m not sure how efficient this method of carding would have been. The tool itself, however, looks very much like the implement to teasel fabric. There are subtitles.

A couple of weeks ago I wrote about the wool trade in the fourteenth century. I listed some of the processes the fleece underwent on its way to becoming cloth. Although I have a fairly good idea what happens to wool before it finds itself on my knitting needles, I hadn’t even heard of some of the things that happened to medieval wool.

The list of processes comes from Textiles and Clothing 1150 – 1450, so I can’t be entirely certain that they were all used in the fourteenth century. The authors also point out that not all of the processes were used in all parts of England.

The first process on the list stumped me. I had no idea what willowing was. Fortunately, I found the blog of Josefin Waltin, who explained that you beat the wool that has been shorn from a sheep with two willow sticks. The purpose is to get the vegetable matter out of the wool. If you’ve ever seen sheep in a field, you’ll know that it has bits of sticks, leaves, grass and other (even less appealing) things stuck in its fleece. You don’t want any of that in a fabric that you’re going to wear. Waltin says the other reason for willowing is to open the locks (the small bits of wool that stick together after the sheep has been shorn).

Here’s a video Waltin made of her willowing some wool.  It looks like an enjoyable process.

The next process is washing. As we’ve just seen, fleeces are not clean, even after they’ve been willowed, and they need to be washed. When it comes from the sheep, the fleece is full of lanolin, which is a wax secreted by the sheep. This was a delicate process, since the water used had to be hot to get rid of the lanolin, but agitating the wool in hot water would cause it to felt.

Once it was clean,  the wool could be dyed, or used with its natural colour. Some monks, for example, wore habits of undyed wool. I’m planning on doing a separate post on dying, as it’s a huge subject.

After it had been dyed, the wool could be blended with wool of another colour. This meant combing wools of different colours together. Despite the willowing and the washing, there could still be dirt in the wool. Combing removed more of it, but its main purpose was to remove imperfect fibres and to make all the threads run in one direction ready for spinning. The combs have evil-looking spikes set in rows. The wool is placed onto the set of spikes that isn’t going to move, then combed at a right angle with the second set.

There are images of the processes on my Pinterest board here and there’s a video of Josefin Waltin combing and spinning in the fourteenth-century style below.

Carding is a similar process to combing, except that the spikes are shorter and are arranged all over a square paddle. The carder holds one in each hand and uses them like brushes, pulling the wool from one card to the other until all the fibres goe in the same direction, so that it can be spun. Cloths were often woven from a warp that had been combed and a weft that had been carded.

Bowing was another process like combing and carding. If wool was too short for combing, it could be bowed. The bow was a specialised instrument, with a cord stretched between two points. The cord was placed in the wool and the wooden frame was struck to make the cord vibrate. The wool became fluffy and could be spun or felted. This method wasn’t used very much after the thirteenth century in England.

I’ve written about spinning before. Although wool could be dyed earlier in the process, it was usually dyed after it had been spun. This was often so that the whole batch of thread that was going to be used for a particular project could be dyed to a uniform colour, not that that was always important.

Once the wool was spun it was ready to be used, but there were still many processes that it underwent before it before someone had the fabric in their hands in order to make a piece of clothing. We’ll look at some of those next week. 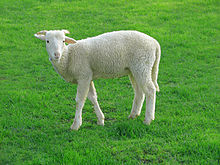 All over Europe, people used woollen fabrics for clothing and bedding, and the best wool came from England. Flanders and northern Italy were the main weaving centres. importing wool from England and exporting woollen cloth back across the Channel.

It’s been estimated that there were at least nine million sheep in England in the first few decades of the century. The vast majority of them were providing wool for export. Some of the great monasteries had huge flocks, but it was worth keeping even a small flock in order to benefit from the wool trade. Early in the century some monastic flocks could contain 15,000 sheep and there are records of many individual manors with 600 sheep or more. 100 to 300 was probably the more usual size. After the Black Death more land was available for sheep and the size of flocks expanded. It wasn’t unknown for a flock to number 30,000 sheep.

Sheep were very susceptible to the various murrains of the Middle Ages and the sizes of flocks fluctuated according to the prevalence of disease. Some large estates lost two-thirds of their flocks in one year during a particularly bad time.

The quality of wool varied and this was reflected in the prices paid for it. Fleeces from Shropshire, Herefordshire and Lincolnshire were usually considered the best quality, while those from East Anglia, Devon and Cornwall were the worst.

The fleece was the most expensive item in making cloth. Labour was cheap, and turning a fleece into fabric was labour-intensive, as were most tasks in the fourteenth century. Wool had to willowed, washed, dyed, blended, combed, carded, bowed, spun, warped, sized, woven, fulled, stretched, teasled, shorn and calendered.

Wool could only be exported through certain towns. One of them was London and about half the wool exported went through it. Another third went from Boston and Hull. The rest went via Southampton and Lynn. Piracy at sea was always a problem, particularly after the beginning of the Hundred Years War.

Customs duties had to be paid on wool. It was probably the most consistent tax of the fourteenth century. Edward III was a great soldier, but a poor economist. He tried to raise funds for his war against the king of France by dabbling in the wool trade, but failed miserably. For twenty years the wool trade was destabilised. By the late 1350s he had given up, but it took time for it to recover.

From 1363 all wool exports had to go through Calais. This was partly to make the English town there viable. Edward III had captured it after a year-long siege in 1347, but it was costing more than it was worth to keep it.

By the 1370s raw wool exports were beginning to fall, but by then England was exporting processed wool in the form of cloth.

England in the Reign of Edward III by Scott L. Waugh