The British Museum in Thirteen Objects – The Chaucer Astrolabe 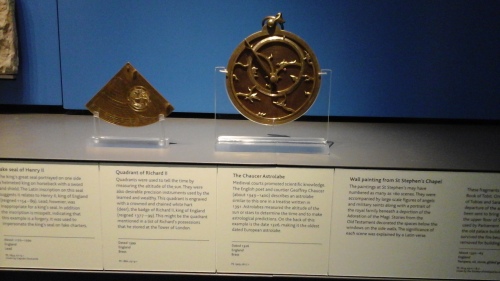 The astrolabe was a multi-purpose scientific instrument in the Middle Ages. When the illegitimate child of Abelard and Héloise was born in the early twelfth century, he was named Astrolabe in its honour.

An astrolabe, according to James Robinson in Masterpieces of Medieval Art, is a two-dimensional map of the three-dimensional celestial sphere. In much the same way that an Ordnance Survey map can help you find your way through a wood, up hills and over streams you’ve never seen before, so an astrolabe can you to find your way through the heavens. It was, as you can see, a sophisticated instrument.

The Chaucer astrolabe is dated 1326, 16 years before Chaucer was born, and is the earliest dated European astrolabe. Although it didn’t belong to Chaucer, the poet wrote a treatise on the astrolabe, the first in English, and described an instrument very like this. Dedicated to his son Lewis, it was written by 1391. There are more than thirty surviving manuscript copies of the treatise.

Most texts about the construction and use of astrolabes were written in Latin. They were used to tell the time in the many different time systems that existed in fourteenth-century England. It could be used to work out angles and the height of objects. It could also be used while casting horoscopes.

Saints’ days in English and the latitude for Oxford are written on the back, indicating that it was principally for use in England. There are also inscriptions relating to Jerusalem, Babylon, Montpellier and Paris.

It’s just over 5 inches in diameter and less than half an inch thick. The star pointers are shaped like birds.

On the left in my photograph is Richard II’s quadrant. The raised piece that you can see is his emblem: the white hart. It’s a timepiece, enabling its user to tell the time from the angle of the sun. It’s dated 1399, the year of the king’s death.