Anatomy of a Castle – Gates and Gatehouses

The picture at the top of the post shows what remains of the drum towers by the gate to Southampton Castle. Drum towers are round towers connected to the walls of a castle. Unsurprisingly, they’re so-named because they look like drums. I hope you’ll forgive a diversion, but the pub you can see at the bottom of the alley is supposed to stand on the location of the house in which Jane Austen stayed during the three years she lived in Southampton.

Old Sarum’s gate was approached over a bridge. You can just see the gatehouse at the top of the bridge. There would be gatekeepers in the gatehouse, waiting to open gates and raise portcullises for residents and welcome visitors. 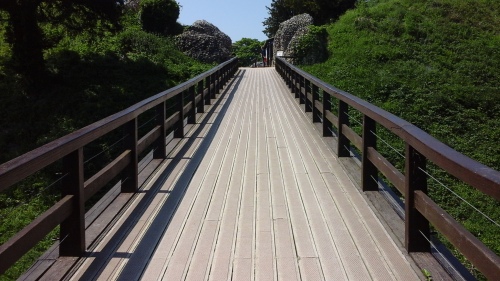 The medieval bridge would have been hinged, allowing it to be ‘broken’ by swinging it up or down when unwelcome visitors arrived. It could not, however, be raised in the way that you might be thinking.

The gatehouse to Portchester Castel is rather impressive. You can see in the foreground of the photograph to the left and the right the grooves for the portcullis. Through the gate you can see the outer bailey and one of the outer walls. This gate gave access to the castle itself.

Portchester Castle has four gates in the outer walls. They’re all on the sites of the original Roman gates. This is the landgate, dating from the fourteenth century. It connects the outer bailey to the land side of the outside world.

There’s water on two and a half sides of the castle, so there’s a watergate at the opposite end of the outer bailey, which you can just about see on the right of this photograph. It would allow access by sea. 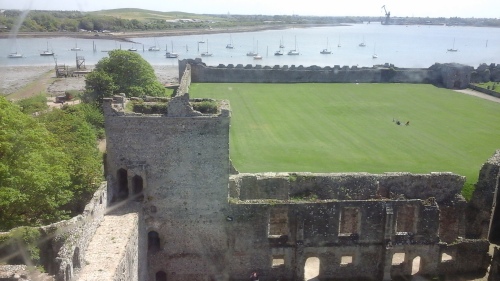 Like the landgate, the watergate is a fourteenth-century replacement of a Roman gate. It also had a portcullis.

Below is the medieval entrance to Kenilworth Castle. It’s less than impressive now, but the towers were once two (or more) storeys high. This allowed the portcullis to be raised and lowered by means of a winch on the first floor.

The Gatehouse at Kenilworth Castle

As well as the main gates, most castles also had postern gates. If, like me, you’ve always thought of postern gates as small and unobtrusive, the one at Old Sarum will surprise you. It was almost as large as a main gate and had a recess by it for a guard. It’s also right next to the keep.

What really bothered me when I was there was that the only place you could go once you were through the gate was into the ditch. That’s a problem when you think that the postern is supposed to be a secret, but there would have been a bridge over the moat and a path leading down to another gate in the outer defences.

The postern gate at Portchester Castle is so small that I missed it. In the photograph below it’s the black shadow in the Roman wall on the right of the castle. The Roman fort was laid out in a square and there was another postern gate in the opposite wall.

Postern gates were most useful during a siege, when soldiers could leave the castle in relative secrecy and attack the besiegers. True to my romantic hopes, they could also be left open to allow the enemy (or the hero, in my case) entrance into the castle.