What Did Pardoners and Summoners Do? 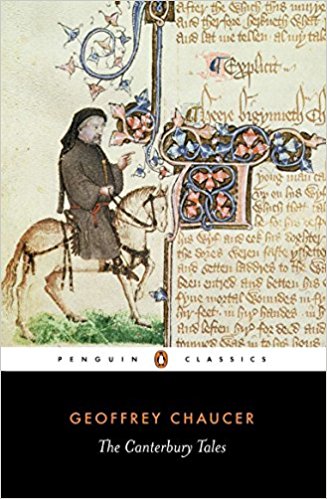 Can you tell that I’ve finally started reading The Canterbury Tales? I’m reading it in Middle English, because I like doing things that are difficult. To be honest, it’s not that hard to get an idea of what’s going on, but you do need the vocabulary to understand the detail. Fortunately, the Penguin edition that I’m using has both a very good glossary and extensive notes. It’s a huge book, though, so it will take me a while to get through it.

I’ve only read a few pages so far, but I already have some questions that aren’t answered for me in the notes. To be fair, they might be answered later, but I’m beginning to suspect they might not be. This post will be the first in an occasional series about things relating to The Canterbury Tales. They might be things that I learn from reading the poem or questions arising from it about life in fourteenth-century England. Today’s post is the latter.

Although I haven’t come across them in the book yet, I know that two of the pilgrims going to Canterbury are a pardoner and a summoner.  What I don’t know is what they do, except the obvious that one pardons and the other summons. Who do they pardon and summon, though, and on whose behalf?

Here are the answers.

The pardoner was a secular clerk or friar, whose role was originally that of messenger, which we’ll come to later. By the fourteenth century he was carrying relics around with him, which he displayed for a fee. Anyone who knew anything about relics in the Middle Ages would have realised how unlikely it was that someone in such a lowly position would be travelling around with one, let alone more than one, relic. Even tiny fragments were kept in reliquaries or inside shrines and further secured within churches. Chaucer’s pardoner has a pillow-case he says is the veil of the Virgin Mary and he also has a bit of St. Peter’s fishing boat. I suspect that Chaucer’s contemporaries were very aware of what was going on with regard to false relics.

The pardoner also sold indulgences, which many people wrongly believed were pardons for sin. Their official title was questor (asker), since they asked people about their sins. The role was abolished by the pope in 1562, a little late, as the selling of indulgences was one of the abuses that figured largely in Luther’s ninety-five theses in 1517, which led to Reformation.

Indulgences were instituted with good intentions in the tenth century.  People confessed their sins to a priest and were absolved. They were then given a penance. Sometimes people were given penances that were beyond them physically and they could pay something in place of carrying out the penance. That was an indulgence. At first indulgences were specific to the person receiving them.

More general indulgences were introduced in the eleventh century. These could apply to anyone who met the conditions attached to them. The best known general (or plenary) indulgence is probably the one relating to the First Crusade in 1096 when Pope Urban II said that any man who set out to take Jerusalem for Christianity would have all his penance for the rest of his life cancelled.

Urban II also made use of partial indulgences for pilgrims visiting to specific churches and those who helped to restore a monastery in Normandy. During the twelfth century bishops started issuing their own indulgences to pilgrims visiting certain shrines in their dioceses. From that point it got out of hand.

An indulgence could reduce or cancel entirely the sinner’s penance. It did not forgive the sin or release the sinner from his guilt, although many people believed that it did. The finer points of theology might have been discussed in the great church councils attended by cardinals and bishops, but few parish priests understood them. Their parishioners had even less chance of knowing what the real purpose of an indulgence was.

Let us return to our seller of indulgences. The things that pardoners generally did were prohibited. They were not supposed to sell indulgences, preach in churches or forgive sins and they weren’t supposed to collect money for displaying relics. Officially all they could do was deliver the paperwork of an indulgence from the pope or a bishop to a repentant sinner.

As early as 1215, at the fourth Lateran Council, it was agreed that questors should be licensed. A licence could come from the pope or a bishop. In theory that meant that pardoners would be limited in where they could go and that they would have to show their licence as they travelled. In practice few people could read and most people wouldn’t have known to ask to see the licence anyway.

That obviously didn’t work and the behaviour of pardoners got worse. An edict was sent out in 1267 to say that pardoners couldn’t demand accommodation with clergy in the towns and villages they passed through, nor could they force a local priest to gather the parishioners to hear them preach, which was obviously what had been happening.

Even that wasn’t enough, though. By 1312 pardoners had to show their credentials to bishops in order to enter their dioceses. The Canterbury Tales was written towards the end of the century and things were clearly no better. To men like Chaucer, pardoners were clearly disreputable.

The other pilgrim whose job was a mystery to me is the pardoner’s friend the summoner. He was an official of the ecclesiastical courts and it was his responsibility to bring people to who were believed to have broken canon law to the archdeacon’s court. Lay people were summoned to the ecclesiastical courts for not paying their tithes or death duties, or after being accused of a sexual offence, or if they were involved in a marital dispute or were accused of perjury. By the end of the fourteenth century summoners were considered to be little more than spies and blackmailers.

They were introduced in England in the thirteenth century. It was widely believed that they threated people with non-existent crimes in order to extort money. They could also be bribed by those who were guilty to let them go. In this they were no different from many in the secular courts, although I think they were probably meant to be different.

15 responses to “What Did Pardoners and Summoners Do?”