Trial by Battle by Jonathan Sumption – A Review 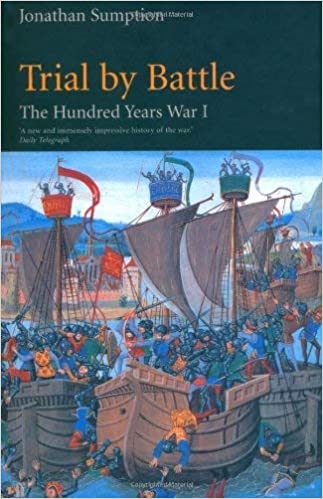 Trial by Battle is the first volume in Jonathan Sumption’s history of the Hundred Years War. It begins with the death of Charles IV, King of France, in 1328 and ends with the fall of Calais to Edward III in 1347.

Many pages and words are spent on examining the causes of the war. This is really useful, as its origins are more complex than shorter histories choose to say. It’s not simply that Edward III was making a claim for the French crown, or that he was defending a man who had taken refuge in his court, or that he wanted to recover lost territory in Aquitaine, although all of these (particularly the last) played a part. Sumption takes more than 200 pages to look at the political situations in England and France, their relative wealth and the characters of their kings. When the war finally starts, it makes some kind of sense.

I knew about some of the things that happened during this stage of the war, but Sumption shows how they relate to one another. Events that have always seemed unconnected are joined together by his vast knowledge and understanding of primary and secondary sources in different languages. Apparently he reads French, Italian, Spanish, Dutch, Portuguese, Catalan and Latin. The bibliography alone takes up 14 pages.

As you would expect from a Law Lord, Lord Sumption is very decisive on the legal niceties of claims of kingship and repudiating treaties. He also has a very clear view on what Edward III intended to achieve when he declared himself king of France.

I have enjoyed reading Trial by Battle very much, but I don’t know that I would recommend it to someone who knew nothing about the Hundred Years War. It would probably help to have an overview of what happened during this period and to have some knowledge of who was involved first. I was very uncertain about who was doing what in the Low Countries, partly because some of the counts and princes owed allegiance to the Holy Roman Emperor and some to the King of France and I wasn’t always sure which was which, but also because most of them changed sides, one or two of them more than once. If you already have some understanding of the early years of the Hundred Years War, but want more detail, this is probably the book for you.

9 responses to “Trial by Battle by Jonathan Sumption – A Review”