Anatomy of a Monastery – The Gatehouse

This is our final visit to the monastery and we’re leaving, as is proper, via the gatehouse. Like castles, monasteries were surrounded by a wall. In some parts of the country monasteries were subject to raids at various times, so some kind of fortification was important. Since monks had no means of defending themselves, the wall and the gate had to be as strong as possible.

Gatehouses were staffed by porters, whose job it was to question those who wanted to enter, or leave, the monastery. The purpose of their questions was to find out whether that person had the right to come in or go out. Once he had made sure of the visitor’s identity and their reason for coming to the monastery, the porter directed them to the relevant obedientiary.

The porter could either be a monk or a lay employee and he was usually given accommodation in or near the gatehouse.

Gatehouses didn’t just allow entry to people, but also to carts. Supplies arrived from the abbey’s granges in carts or on the backs of horses, and guests would arrive with carts containing some of their belongings. My favourite gatehouse is this one where you can see the separate entrances for both carts and for people on foot. In many monasteries there was a single entrance for both.

Visitors were only allowed into what was effectively an outer courtyard. They were not allowed into the inner courtyard: the cloister. Like an outer bailey of a castle, this outer courtyard, known as the precinct, could be very large. It was here that any stores, barns, workshops, cattle-sheds, mills, smithies, stables and cemeteries were located.

The gates were closed at Compline, the last office before the monks went to bed. The porter could, however, open them for guests who had been delayed on their way or even pilgrims arriving after dark.

Large gatehouses like the one at Easby Abbey below, had rooms upstairs that could be used as offices or accommodation for the porter. Stores of items to be given as alms to the poor could be stored there so that they could be dispensed without the poor needing to enter the monastery. Alms were given out from a covered porch on the other side of the gate.

Another use for the space on the upper floor was as a prison. Prisons were used to punish disobedient monks. We saw some weeks ago how they were sentenced in the chapter house and imprisonment was one of the most severe forms of punishment.

The gatehouse at Roche Abbey was built in the fourteenth century. Most of the slabs underfoot are original. Considering its purpose, it’s very elegant. It has beautiful vaulted ceilings with carved heads scattered about. When it was built it had an upper story, but that hasn’t survived. 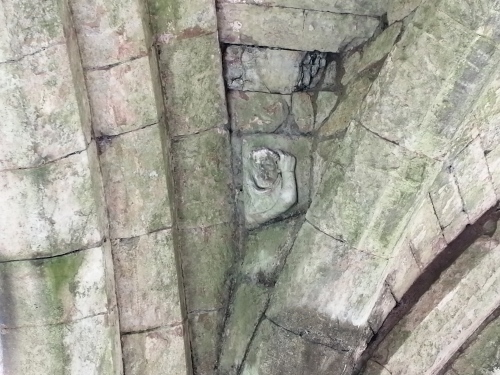 Sources:
The Companion to Cathedrals and Abbeys by Stephen Friar
Roche Abbey by Stuart Harrison
Richmond Castle and Easy Abbey by John Goodall

23 responses to “Anatomy of a Monastery – The Gatehouse”