Anatomy of a Monastery – The Monks

Thanks to the dissolution of the monasteries under Henry VIII in the mid-sixteenth century, we have a (mostly) false idea of their number and importance to people in the Middle Ages. If they weren’t broken up and their stones and lead taken away to be used elsewhere, monastic buildings were turned into private dwellings and we have few physical reminders of them.

In my own town, for example, the friary that was within the medieval town’s walls has disappeared completely. A priory just outside those walls has left behind a gateway in someone’s garden and is recalled in a street name. Within 5 or 6 miles of my house there were at least five monasteries plus hospitals and other institutions founded and managed by them. I can’t over-emphasise how important monasteries were and how much of an impact they had on the lives of everyone in England, monks or otherwise.

Not all monasteries were as large as Rievaulx in the photograph above, but they all had similar spaces within them to meet the requirements of the monastic life. In order to understand the spaces, we need to look at the purpose of a monastery. The monastic movement began in northern Africa in the third century with men and women going to secluded places to live alone and pray without distractions. Gradually the hermits joined together for support and protection, and a number of different sets of rules were created to govern their communities. Those produced by St. Benedict early in the sixth century gained widespread acceptance. 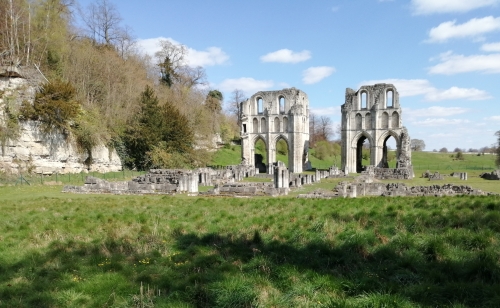 The rules set out what the monks could eat and wear, and how they would spend their time. Monks weren’t to spend all their time in prayer, but also take on physical work. The rules also set out how a monastery was to be run. The life of a monk wasn’t supposed to be easy.

St. Benedict divided the monks’ day into three parts – opus dei (work of God or church offices); lectio divina (spiritual reading); and opus manuum (manual labour). As you can see above, their timetable varied from season to season, depending on the hours of daylight available, although some of the offices took place during the night.

The number of offices comes from the Psalms, in which the Psalmist praised God seven times a day and got up at midnight to give thanks. There were eight offices a day and they were made up of psalms, readings from the Bible and prayer. In addition, Mass was celebrated once a day.

Spiritual reading took up about two hours of the day, bearing in mind that the length of an hour was longer in the summer than in the winter.

There was also a meeting of the entire community in the chapter-house each day. This was when the business of the monastery was discussed and rule-breaking punished. At the end of the meeting, a chapter of the Rule of St. Benedict was read aloud.

The manual labour part of the day lasted from two to four hours. This could take the form of gardening, agricultural work, carpentry or copying manuscripts. The monks were supposed to do all the labour need to support the community themselves, but many monasteries had servants to assist, St. Benedict having conceded that not all monks would be up to manual labour. The Cistercians decided that their whole day should be devoted to the opus dei and the lectio divina, and instituted the concept of lay brothers, who had dedicated spaces within a monstery. They slept in a separate dormitory, ate in a separate refectory and were cared for when in ill a separate infirmary. They spent most of their time in manual labour and only attended two offices a day.

Having established what monks did, we can move on next week to look at the spaces in which they carried out those activities.

37 responses to “Anatomy of a Monastery – The Monks”