This week we’re back at City Museum in Winchester, but looking at things from a slightly different angle. Earlier this year I wrote a series of posts about how some textiles were produced in the Middle Ages. You can find the first one here. While I was researching the series, I read about the processes and looked at pictures of the tools used, but there’s a world of difference between looking at a picture and seeing the real thing. City Museum houses some textile tools from the Middle Ages. 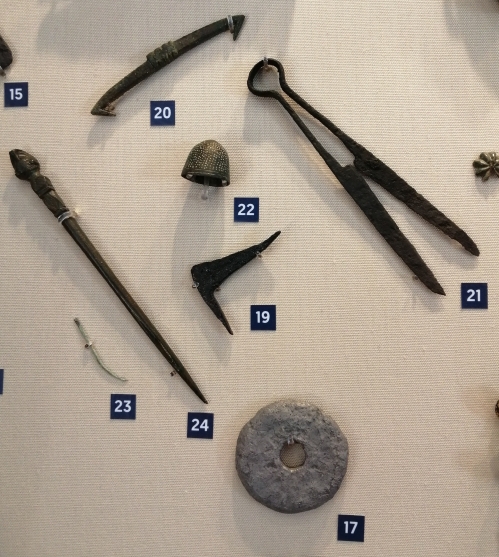 The uses of some of the objects are fairly obvious.  The whorl sat on a spindle to balance it when yarn was spun. Spindles were made of wood, so tend not to survive. Whorls were usually made of stone or clay, but this one is lead.

The sewing needle (slightly bent as the description card points out helpfully) was used in the same way that a needle would be used today. It’s thicker than I would like to use, but I suspect it wasn’t meant for fine needlework. Someone using it would have need of the beautiful little thimble.

The shears (21) were probably used for cutting fabric or thread. They look too small to have been used for removing the nap on cloth, although they look too large to snip sewing thread. I don’t suppose the needlewomen of the Middle Ages had a large collection of scissors of different sizes as I do.

According to its card, the harbick (20) was used to secure cloth to a board when the nap was shorn. It’s not an object I’ve come across before in my reading and I can’t find out any more than the museum card told me.

It was the tenterhook (19) that first caught my eye in the display. Tenterhooks were used to stretch fabric on a tenterframe after it had been fulled. I had no idea the hooks were so tiny, but I suppose they would have damaged the fabric had they been much larger. It’s not every day you get to see something that is only remembered through an idiomatic saying, which is why I was quite excited to see it.

I have to confess to being more than a little worried about the couching needle (24). Everything I’ve read or seen about couching indicates that an ordinary needle is used. Couching is an embroidery technique in which a thread is placed on the fabric and held in place by small stitches along its length. In the Middle Ages couching was mostly used to secure gold thread, which was considered too valuable to be wasted on the back of an embroidered piece.  Gold thread was made with gold leaf, so was very expensive. I suppose this needle could be a laying tool, used for keeping threads flat and controlled while the needle is pulling them through the fabric, but I don’t know. If anyone recognises it and understands its purpose in couching, I’d be grateful if you’d leave a comment below.