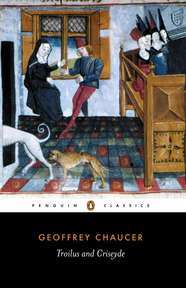 Following last week’s post about The Decameron, I thought I’d write about an English work from the fourteenth century. It’s a story from the Trojan War that’s been used by many writers over the centuries. Criseyde is the daughter of a Greek who fled Troy at the beginning of the war, leaving her behind. She has been an exemplary citizen and is highly regarded, for her virtue and quiet lifestyle as much as for her beauty. Troilus is the son of King Priam, the king of Troy. He’s handsome, brave and a great soldier. One day he sees Criseyde in the temple and it’s love at first sight. He declares that he’ll die if he doesn’t meet her, worrying a friend of his, who happens to be Criseyde’s uncle. The uncle engineers a meeting between the two of them, but that’s not enough for Troilus. He and the uncle trick Criseyde into spending the night with him and they become lovers. They declare their undying love and continue to see one another in secret. Meanwhile, Criseyde’s father decides that he wants his daughter back. He suspects that Troy won’t be a safe place for her for much longer, so he gets a message to her telling her to leave the city. Criseyde doesn’t want to go and Troilus doesn’t want her to go, but he has to escort her out of the city and hand her over to her father. She says that she’ll find a way to run away from the Greeks and rejoin Troilus. He says she’d better not fall in love with the sturdy-looking knight who’s with her father. Diomede, the knight, sees a woman without friends and decides to seduce her. After a few days, Criseyde realises that escaping from the Greek camp is going to be more difficult than she thought and allows herself to be seduced. Troilus eventually admits to himself that she’s not coming back and goes out to die in battle.

It’s a sorry tale, in which no one mentions marriage, which would have allowed Criseyde to stay in Troy, although, given what happens later when the city falls, that probably isn’t a bad thing. You can probably tell that I’m overly taken with the story itself. Troilus wasn’t a hit with me either. He spends a lot of time weeping, which wouldn’t have bothered fourteenth-century readers at all, but annoyed me. It didn’t annoy me because I think men shouldn’t cry, but because Troilus is entirely without agency. He does nothing for himself, but his tears cause his friend to act on his behalf. In many ways, that shows how requirements for a good story have changed over the centuries.

In the elements and structure of the story, Chaucer follows Boccaccio’s Il Filostrato quite closely, although there are whole sections which are Chaucer’s own creations. Boccaccio didn’t invent the story, but took it from a twelfth-century poem, the Roman de Troie by Benoît de Sainte-Maure. It was a popular tale in the Middle Ages and the best-known retelling was by Shakespeare. Chaucer finished writing his poem around 1381.

In my Middle English edition, the poem is 347 pages long. That makes it too long to be read to an audience over the course of an evening,  the way in which most people would have experienced it in the fourteenth and fifteenth centuries. It’s divided into five books, though, each of which would probably make an evening’s entertainment.

Troilus and Criseyde is set during the Trojan War, but the world its characters inhabit is very much fourteenth-century England. As well as it being an example of something written in the fourteenth century, the poem can teach us a lot about the world in which Chaucer lived. The garden where Criseyde walks with her ladies is set out like an English garden and the house in which she lives was of a type that would have been familiar to Chaucer and his original audience. The furnishings in her house would have been found in houses of the well-to-do at the time. Chaucer refers to chess and tennis and other games played by fourteenth-century people in their free time. Like Boccaccio’s The Decameron, Troilus and Criseyde is worth reading for its own sake, but it’s also a good source of information about life in the fourteenth century.

You can read about Chaucer’s life in this post.

18 responses to “Troilus and Criseyde”