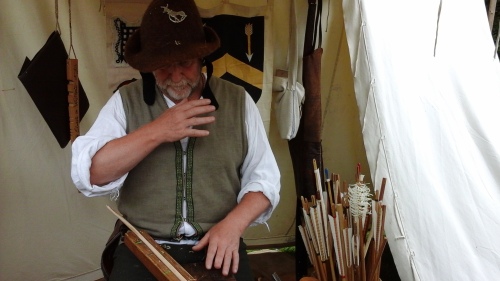 I know this photograph doesn’t show a surgeon; I don’t suppose many re-enactment groups have one. The photograph of the fletcher shows the cause of many injuries requiring the surgeon’s skills: arrows.

These days surgeons are the top of the heap when it comes to medical practitioners, but it wasn’t always the case. In the Middle Ages it was the medical experts in the universities who held sway and surgeons were mere practitioners like physicians and midwives.

In theory there was a big difference between surgery and medicine, but in reality there was probably not much difference until the thirteenth century. Only surgeons were supposed to suture wounds, use a knife and set fractured bones, but physicians often did all these things, just as surgeons also prescribed for diseases and gave dietary advice. Both practised bloodletting.

Many surgeons couldn’t read. They learned their skills by being apprenticed to an experienced surgeon and watching what the master did. The apprentice had to learn where and how to cut the skin; how to apply salves and ointments; and how to tie bandages. Surgeons used tools such as knives, mallets, borers, claw-bats, trepans, hooks, forceps and chisels.

Both physicians and surgeons were somewhat limited by their lack of knowledge of what really went on inside the body, since dissection of the dead was prohibited. There was a very strong belief that the whole body of a dead person had to buried in order for it to be raised at the resurrection of the dead. This was one of the reasons why the punishment of beheading someone and removing the head to display it as a warning elsewhere was so terrible. I do wonder, though, how this belief was reconciled with the practice of venerating bits of saints’ bodies. How were they supposed to be raised on the Last Day when their bodies were spread across Europe in the form of relics?

An autopsy was carried out in Italy in 1286 in the hope of discovering which part of the body was affected by an unknown disease that was killing people in the area, but it was a very rare occurrence.

In about 1306 Henri de Mondeville wrote a book called Chirugia (Surgery) in an attempt to elevate surgeons from their lowly position. His book contained detailed pictures and text of surgical procedures covering anatomy, amputation, cautery, lancing boils and embalming the dead. It was a learned and theoretical book in an age when few surgeons could read.

From the mid-fourteenth century there were moves in parts of Europe to ensure that physicians and surgeons were licensed … and that they weren’t women. It was also during this time that surgery and medicine began to become even more separate.

One of my reference books, The Medieval Surgery, contains black and white line-drawings taken from a (probably) thirteenth-century text about surgery by Roger of Salerno. Most of the illustrations (and presumably the text, which isn’t supplied) are very disturbing for a twenty-first-century reader.  Some of the illustrations show the surgeon sticking his finger into a wound to explore it; extracting something from the patient’s forehead with forceps; removing an arrow from the head of a patient; and removing scrofulous sores with a hammer and chisel – all without the aid of anaesthetic.

One of the procedures depicted in the book is the removal of a fistula. It’s on the patient’s face, between his nose and eye. The surgeon cuts into the fistula and inserts a feather dipped in egg white into the wound. Egg white was often used to clean the area of a wound before it was sutured or cauterised. In the case of this patient, it’s cauterisation. The surgeon inserts a rod of red hot iron into a tube placed on the remains of the fistula. It’s definitely not something I’d want someone to do to me. You can see some of the images from the manuscript here.

The Medieval Surgery by Tony Hunt

23 responses to “The Medieval Surgeon”