Anatomy of a Castle – the Kitchen

With upwards of fifty people to feed every day, you would expect castles to have large kitchens and you would be correct.  Often they were separate buildings. It wouldn’t do for a fire in the kitchen to spread to the lord’s domestic apartments. Given that cooking was done over an open fire, there was always a risk of a fire escaping the confines of the hearth and burning down the kitchen, as we’ll see below. Where the kitchen was joined to the building housing the hall, there was usually a thick stone wall between them

The kitchen at Kenilworth is essentially that built by John of Gaunt in the second half of the fourteenth century. It’s huge.  The English Heritage guidebook tells me that it’s 66ft by 28ft, significantly larger than most aristocratic kitchens. For once I’m grateful that I couldn’t take a photograph without children on a school visit appearing in it, as they give an idea of the scale. 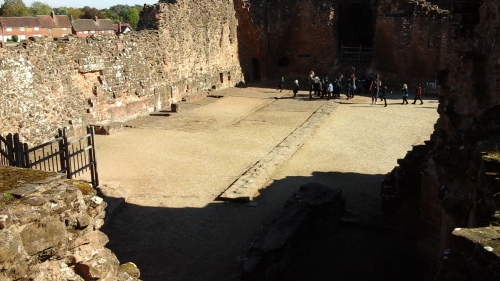 There were three fireplaces along the wall to the left of the photograph. The brickwork down the middle of the room was a drain for kitchen waste. John of Gaunt had a very large household, hence the need for a large kitchen.

It also had a bread oven. 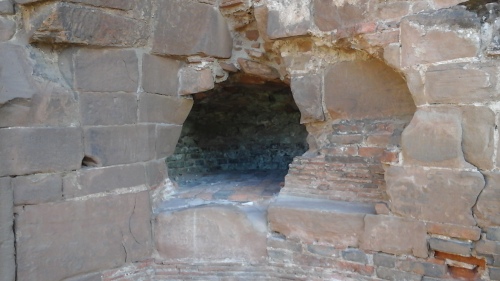 I’m not sure they could have baked many loaves in an oven that size. There must have been more ovens somewhere else.

Within the large kitchen at Kenilworth Castle there was a smaller kitchen: the privy kitchen. That was where the food for John of Gaunt, his family and his important guests was prepared.

The kitchen at Old Sarum was much smaller. It was divided into three and the largest part contained three bread ovens. It was probably built around 1307, when the previous kitchen burned down. That might explain why it’s in the middle of the inner bailey, far from the castle’s main buildings.

The kitchen in the palace of John of Gaunt’s nephew, Richard II, at Portchester Castle is tiny and cooking was probably done over a central, open fire, which was quite old-fashioned for the 1390s, especially in the palace of a king. This was, however, one of Richard’s many palaces and it wasn’t his main one.

As you can see from the photograph below, the food was taken up the steps and through the doorway into the Great Hall.

Entrance to the Great Hall from the Kitchen, Portchester Castle

Kitchen staff, like most of the household, were men (or boys) and they were mostly unseen. In aristocratic households where boys and young men were sent to learn how to be knights, one of their first lessons was waiting on the lord’s table. They learned the ritual of a meal, so they would be able to perform it correctly in their own households.  It was considered an honour to wait on the lord.

A large household meant storing vast quantities of food, drink and fuel. This is one of the vaulted cellars at Kenilworth Castle. 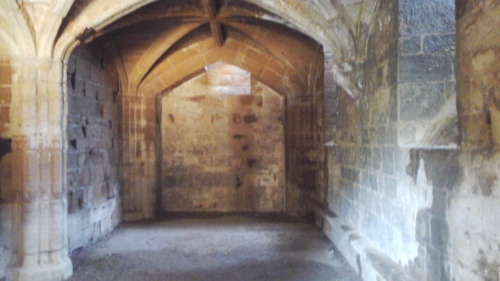 22 responses to “Anatomy of a Castle – the Kitchen”