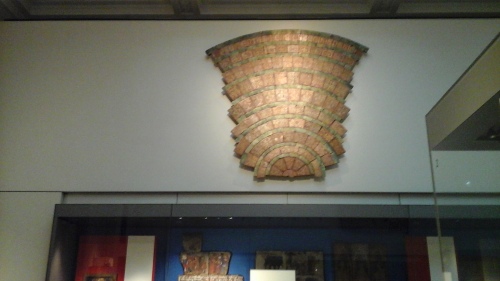 The King’s and Queen’s Pavements were laid in Clarendon Palace, near Salisbury, in Wiltshire. The palace was originally a royal hunting lodge and Henry II and Henry III both spent a lot of money converting it into something fit to receive them for longer periods.

It was Henry III who was responsible for the pavement above. He had a circular floor laid in his private chapel around 1244. The floor was about 4m in diameter.  Up until this point tiled floors were mainly found in ecclesiastical buildings. Once the king had one, everyone wanted a decorated pavement in their houses.

The construction of the pavement was ordered on 12th March 1244. The tiles were made on-site and a kiln was built nearby to fire them.  The thin green tiles are just green tiles, but the brown tiles are inlaid with designs showing very stylised leaves and fleurs de lys. There was an inscription around the outer edge of the pavement, but no one knows what it said since most of the letters are lost and the ones that were found were not necessarily in their original location.

The chapel for which the pavement was made was on the first floor and the tiles were scattered when the building collapsed. The palace was in poor condition before the time of Elizabeth I, who had to eat somewhere else when she visited it, so unsafe had it become. It was a ruin by the eighteenth century.

The Queen’s pavement covered the ground floor of Eleanor of Provence’s personal apartments in Clarendon Palace. She was Henry III’s queen and was a bit of a trend-setter, bringing fashions from France with her. Even in those days the English were in thrall to French fashion. In her private rooms there were glazed windows and a fireplace, both of which took a long time to spread across England.

These are the last of my tiles from the museum.