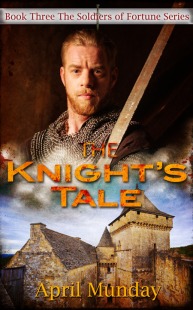 Today the third book in The Soldiers of Fortune series is released.

Stephen is the third surviving Montfort brother. Wounded in the Battle of Poitiers, he decides to remain in Gascony with his friend and captain, Roger de Calais. When the Black Prince sends them on a mission, Stephen discovers that he feels more for his captain than friendship. Roger of Calais is not what she appears to be, however, and admitting their love for one another could lead to death for both of them.

Their story can be purchased here.

The cover is the work of the wonderful Cathy Helms from Avalon Graphics.

Filed under The Books

Tagged as The Knight's Tale, The Soldiers of Fortune

10 responses to “The Knight’s Tale”