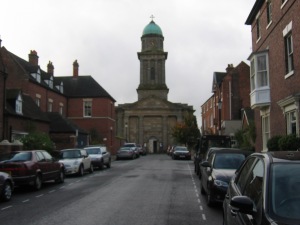 I was in Shropshire earlier in the week and had intended to visit some of the castles in the Welsh Marches. The weather was dreadful, so I gave up on that plan and spent a day in Bridgnorth instead. This is the parish church of St Mary Magdalene, designed by Thomas Telford. As you can see, it’s rather unusual if you’re used to English churches from earlier or later centuries. It was built in the 1790s and is not at all in the Gothic Revival style of the majority of English parish churches erected in the nineteenth century. In the late eighteenth century it wasn’t yet fashionable to ape the Middle Ages and the churches designed and built then reflected that time’s obsession with all things classical. The church that Jane Austen attended when she lived in Southampton was built around the same time and was built in a similar style with four columns at the front and a clock tower.

Telford was a Scot who left his mark all over Shropshire where he was Surveyor of Public Works and the new town in the Wrekin district of the county is named after him. Born in 1757 in Glendinning in Dumfriesshire, he died in 1834 in London and was buried in Westminster abbey, which wasn’t bad for the self-taught son of a shepherd. He had little formal education and was apprenticed to a stonemason at the age of fourteen. He learned as he worked and became very successful.

Telford’s other contribution to Bridgnorth is a bridge over the Severn. There had always been a bridge over the Severn here, hence the name, but flooding was, and still is, common, and the bridge was frequently damaged during the eighteenth century. Heavy floods almost destroyed the bridge in the 1790s and many plans were offered for a new bridge or for ways to repair the bridge. In 1812 the bridge was repaired to Thomas Telford’s plan. There were further repairs later in the nineteenth century and the bridge was also widened.  He built about 40 bridges in Shropshire alone.

I can still remember a school project on Telford over forty years ago, which involved me writing up the findings of my small group for display, because I was the only one who could write in a straight(ish) line on unlined paper. The associated fear of complete humiliation should I fail to do so has lived with me ever since and ensures that I have never forgotten Thomas Telford. The project was about the toll roads that were beginning to be built all over England in the eighteenth century. Tolls had been charged for the upkeep of bridges since the early Middle Ages. Most bridges replaced ferries for which a fee was payable and paying to cross the bridge was acceptable, especially if its users could see that improvements were being made. There were also tolls to enter towns and ports. In the late eighteenth century tolls were being used to improve the roads in order to increase the speed of travel. Telford’s contribution was on the London to Holyhead route along what is now mostly the A5 and was originally (from London to Wroxeter) the Roman road known as Watling Street.  This improvement also included the building of the Menai Suspension Bridge across the Menai Strait, which is between Anglesey and the mainland.

There are also tollhouses all over the country based on Telford’s design. They were made fairly comfortable, because the owners of the road wanted to attract the right sort of toll-collector, i.e. one who would collect the tolls honestly and pay them to their employer. They’re easy to identify, as they’re usually very close to the road. About 100 of them still exist in Shropshire, but you can go into the one at Blists Hill Museum and see how the family of the toll-collector would have lived. There is a picture of it here. The last time I went there there was a fork upright in the garden as if the toll-collector had just been called away to collect a toll. There were 300 tollhouses in Shropshire alone.

Telford wasn’t just prolific, his experience was also broad including bridges, canals, churches, aqueducts, viaducts, roads, harbours. He built bridges over the Severn at Montford (his first bridge) and Buildwas; the Ellesmere Canal; the Caledonian Canal; over 1,000 miles of road and 120 bridges in Scotland. He also wrote poetry. He was a founder and first president of the Institution of Civil Engineers.