The Black Death – An Introduction 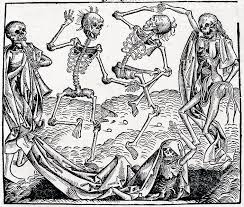 I’ve been interested in the Black Death for a long time, specifically in how it changed people’s lives and how people managed to get life ‘back to normal’ afterwards. This post is by way of an introduction to the subject and there will be other posts about more specific aspects of the plague later.

There has been a lot of research into how the plague started, how it was transmitted and how it arrived in each country in Europe from the East. All of this research is about the beginning and middle of the plague, whereas I’m interested in the end and afterwards.

I set one of my novels The Traitor’s Daughter some years before the arrival of the Black Death in England and it was only after I finished it and was thinking of Alais’ and Hugh’s life after the end of the novel that I realised that, excluding accident or death in childbirth, they and their children and friends would have to face the horror that the plague brought with it, perhaps succumbing themselves. I haven’t had the courage to set a novel before the Black Death since.

It is believed that the plague arrived in England via Melcombe in Dorset in the summer of 1348 and spread west, north and east from there. There were three types of plague: bubonic (the version with the black boils and black fluids), which took several days to kill; pneumonic, which killed in hours; and septicaemic, which caused bleeding under the skin and diarrhoea, but would often kill before any symptoms were displayed. None of this, however, is certain, as there is still disagreement about what the Black Death really was and how it was spread. One current theory blames Asian gerbils Gerbils replace rats as main cause of Black Death. For those who are interested, the full text of the paper is here.

Estimates of the death toll vary from one third to two thirds of the population, with historians accusing the medieval chroniclers of gross exaggeration. In some ways it doesn’t matter whether they exaggerated or not; the death toll was such that society broke down in many places and people thought the end of the world had arrived. You only have to think for a few minutes about how frightening it would be if a third of the people you work with died in the space of a few weeks, or a third of the people in your street, or your village to understand why they thought it was the end of the world.

Since more records of the time have survived in England than in any other European country, more is known about the effects of the Black Death in this country than anywhere else. Many communities were destroyed or came close to destruction. My home town was one that came close to being wiped out entirely. Southampton was the largest port on the south coast and hadn’t recovered from a raid by the French in 1338, which left many dead and much of the town destroyed by fire. So much had been lost that the town had to appeal against taxes in the 1340s. When the Black Death arrived in late 1348 or early 1349 it almost meant the end of the town.

The plague wasn’t choosy about its victims. High born as well as low died, beggars as well as princesses. Edward III’s fourteen year old daughter, Joan, succumbed on her way to Castile to be married. The king’s letter expressing his grief at her loss shows the depth of his feeling for his many children. The Pope in Avignon famously spent his days sitting between two braziers and seeing no one to avoid infection, only leaving for the country in the height of summer and returning in the autumn. It was not so easy for the poor to protect themselves.

A recent area of study that has yielded a lot of information about medieval life is the examination of wills written as the Black Death arrived in a town. If it looked as if you were going to die, it was only sensible to make a will setting out the disposal of your goods and chattels. These wills reveal a great deal about life in the middle of the fourteenth century. They show what people thought was worth passing on to those who survived.

Many books have been written about the Black Death. Possibly the most famous is Philip Ziegler’s ‘The Black Death’, which is a summary of published research up to 1969 when it was written. It almost gives a county by county break down of its progress and effects across England, although he does give an overview of what was happening elsewhere in Europe.

Ole Bendictow’s ‘The Black Death 1346-1353: The Complete History’ is a very clinical study of the causes and transmission of the plague, trying to work out why it spread so quickly in some areas and why others were unaffected. He also makes a case for the death rate being about two thirds of the population. This is a very dry, academic read, but full of facts.

John Hatcher has written a book about the effects of the Black Death on a single village ‘The Black Death: The Intimate Story of a Village in Crisis 1345-50: An Intimate History‘. I haven’t read this yet, but will write a review here when I have.

A good fictional account of the effects of the Black Death on a small community can be found in ‘Doomsday Book‘ by Connie Willis.

And there’s always ‘The Decameron’, an eyewitness account of the plague in Florence by Boccaccio, although some question whether he was in Florence at the time.

Whatever its causes and regardless of how it was transmitted, everything changed after the Black Death. The way people thought about death changed, the church was seen as less worthy of trust and crime levels rose. In future blogs I’ll be taking a look at each of these themes.

One response to “The Black Death – An Introduction”